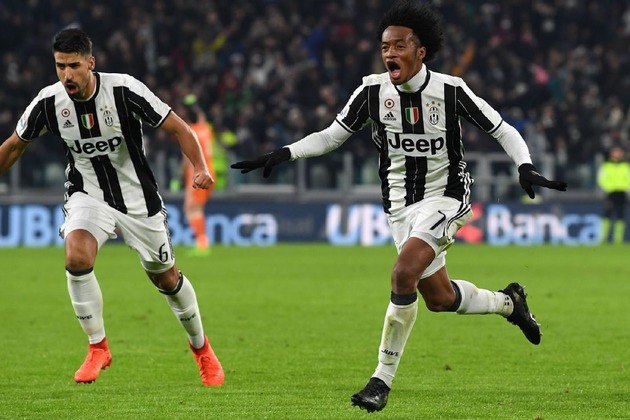 French giants Paris Saint-Germain are prepared to rival the likes of Arsenal and Inter Milan in the pursuit of Juventus outcast Juan Cuadrado this summer. The Colombia international is facing an uncertain future at the Old Lady following the arrivals of Mattia de Sciglio, Douglas Costa and Federico Bernardeschi.

Cuadrado was the second-choice behind Dani Alves for the right wing-back spot last term, but his departure has done him no favours with the above-mentioned trio capable of occupying the position. As A result, the Old Lady are open to the prospect of offloading Cuadrado – just two months after signing him permanently from Chelsea.

The versatile ace initially joined the Bianconeri on a temporary basis from the Blues back in 2015 and his performances through the season convinced the Turin giants to pursue an extended loan contract (three years) last summer. Following another decent-to-good season, the Serie holders decided to activate his £17.1m buy-back clause earlier in May, and they are now looking to make an instant profit from his sale.

According to Le 10 Sport h/t TMW, Les Parisiens are lining up a potential move for Cuadrado, who could be potentially reunited with Alves at Parc des Princes. The former French champions are more or less looking to improve on their attacking options and Cuadrado is seen as an option who could potentially add more pace to the frontline.

Juventus are currently said to value Cuadrado at around £22m, and the arrival of another attacker in Turin would definitely end his prospects of earning any playing time in Turin. On the other hand, Paris Saint-Germain are looking to offload some of their fringe players including Blaise Matuidi, and this could enable the clubs to discuss a potential swap deal with the Bianconeri said to hold a long-term interest in the Frenchman.

Premier League club Arsenal and Inter Milan are also keen on his services, and Cuadrado has the wide choice between three divisions with the option to prolong his Serie A stay with the Nerazzurri.

Opinion: Two Players to watch out for in the 2017/18 Bundesliga season

Opinion: Two Young Players to watch out for in the 2017/18 Eredivisie season