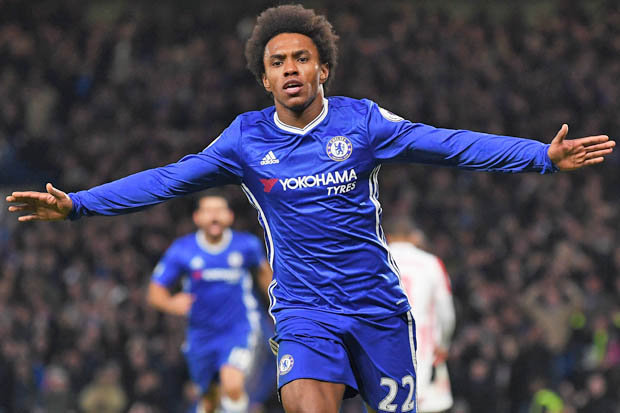 Chelsea are reportedly reluctant to consider the sale of Willian during the winter transfer window after recently snubbing a player-plus-cash deal worth £50m from Barcelona for the Brazil international.

Willian’s future has been a regular topic of discussion with his contract expiring in 18 months’ time but this has not persuaded the Blues to weigh up his departure, given the restricted attacking options within the squad.

According to ESPN FC, Blues boss Maurizio Sarri regards the attacker as a key player in the club’s top-four pursuit and they are unlikely to consider his departure amid the uncertainty surrounding Callum Hudson-Odoi.

The Blues graduate has been identified as one of the brightest prospects at the west London side but his position with the club remains uncertain with the ongoing pursuit from German champions Bayern Munich.

Similarly to Willian, the 18-year-old has just one-and-a-half seasons remaining on his contract and his eagerness to make way from the Bridge seems to have increased the importance of keeping Willian altogether.

Despite this, Barcelona are still maintaining their interest in Willian and it will be interesting to see whether a renewed approach will be made after their initial part-exchange deal involving Malcom was rebuffed.

Willian has not enjoyed the best of seasons under Maurizio Sarri this campaign and he has contributed just two goals and two assists for the team in the Premier League where the club are clinging onto the fourth position.

Next up, the Blues are scheduled to entertain Newcastle United at the Bridge on Saturday evening and Willian should feature from the off, given Sarri has tended to favour experience over youth for the league duties.

Chelsea secured a late 2-1 triumph over Newcastle United on the road in the reverse fixture and they can anticipate another tricky test with the Magpies likely to adopt a defensive approach to frustrate them.