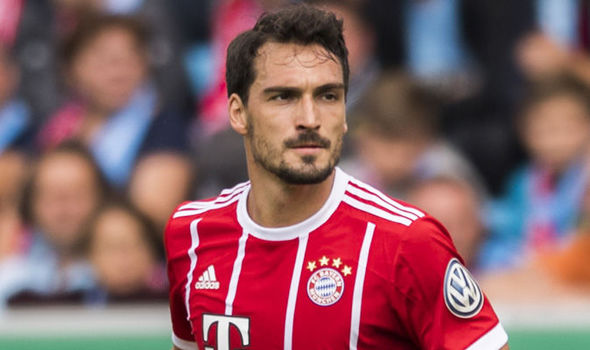 Premier League side Chelsea have reportedly been quoted a price of around £30m for Mats Hummels after they enquired regarding his availability with reigning German champions Bayern Munich.

Blues boss Maurizio Sarri has generally relied on the services of David Luiz and Antonio Rudiger at the heart of the club’s defence this term with Andreas Christensen, Gary Cahill and Ethan Ampadu present to provide backup.

Despite this, the Italian tactician seems keen on pursuing another experienced central defender at the turn of the year and according to The Sun, Hummels has been earmarked as their prime target for the forthcoming transfer window.

It is added that Bayern are willing to sanction the defender’s sale in the same period, should the Blues match their £30m valuation by mid-January – such that they have the additional time in store to pursue a replacement in their ranks.

Hummels has been an impressive performer for the Bavarian giants over the past two-and-a-half seasons but his position has been questioned during the ongoing campaign with manager Niko Kovac regularly rotating him alongside Niklas Sule.

As such, he has managed to start in just half of the club’s league games during the season and this has supposedly got him thinking about a fresh challenge elsewhere where he would have a better chance of cementing a starting berth.

Since the start of the campaign, Sarri has stuck with Rudiger and Luiz as the first-choice central defensive picks but the latter’s future with the club has been deemed doubtful beyond the summer amid the lack of contract talks.

The Brazilian’s current deal is due to expire at the end of the season and so far, there has been no progress in terms of committing him to a new contract, which may however not exceed 12 months based on the club’s shrewd renewal policy.

The west London side have generally declined more than one-year extensions for players aged above 30 and the same stance could remain with Luiz despite Sarri recently urging the club to rethink their contract policy on some players.