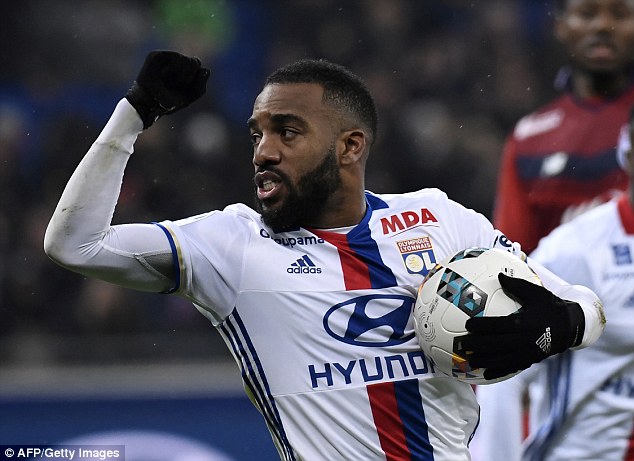 Arsenal will have to break their own transfer record if they are pursue the services of Lyon striker Alexandre Lacazette during the summer transfer window. The France international has been on the Gunners’ radar for the past few years with the north London club falling short of his valuation.

According to The Telegraph, the Gunners are set to retain their long-term interest in Lacazette this summer after Arsene Wenger was spotted in the south of France earlier last week.Initial suggestions were that the Frenchman could discuss a potential world-record move for Monaco’s Kylian Mbappe, whose club are situated just 13 miles away from Nice.

However, the long-standing manager appears to have made contact with Les Gones’ officials as he looks to push through a deal for Lacazette in the upcoming transfer window. The French marksman had bagged over 20 goals in each of his last three campaigns, and he matched a similar feat this term as he clinched his best ever tally of 37 goals across all competitions.

Lacazette was initially eyeing a move to Atletico Madrid in order to feature alongside Antoine Griezmann, but his dreams were scuppered after it was known that Atleti failed to have their transfer ban overruled at the Court of Arbitration of Sport.

The 26-year-old would undoubtedly want to impress at the highest level in order to make France’s World Cup, and for this, he could link up with fellow teammates Laurent Koscielny and Olivier Giroud, who both are indispensable with Les Bleus following their extended stints at the Emirates.

Arsenal failed with a £30m approach for the French lad during the last summer transfer window, but they may have to cough up at twice the sum this summer in order to sign the highly-rated striker. Lyon are demanding an initial £48.7m to sanction the deal with the remaining £10.6m to be settled based on his performances in north London.