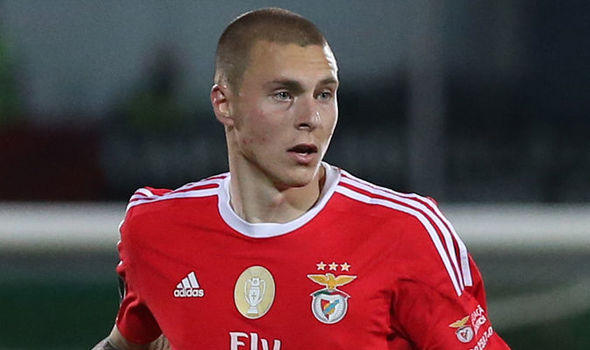 Sweden international Victor Lindelof has poured cold water over the Manchester United speculation by insisting he will be ‘back’ with Benfica during the pre-season. The 22-year-old celebrated a league and cup double with the Primeira Liga giants last term

The Benfica defender had been constantly linked with the Red Devils during the winter transfer window after United officials made contract with club president Luis Felipe Vieira over a proposed transfer.

However, the deal was eventually put on halt for the season with Jose Mourinho impressed by the central defensive partnership of Marcus Rojo and Phil Jones, who had taken the club on a long unbeaten league run.

Despite this, the young defender has remained within the United radar with recent speculation suggesting that the player could link up with the Red Devils on a £35m deal.

According to The Independent h/t Aftonbladet, Lindelof has seemingly ruled out a United move for the time being by insisting that he still has a contract with his Lisbon-based employers, he said: “I’m not [leaving] — I have a contract, so I’ll be back,”

He added that he does not pay much attention to the ongoing gossip, and he would rather concentrate on his ongoing job that is to rejoin Benfica after the season break.

The highly-rated footballer has the potential to feature in the centre defensive or right-back department, and this makes him a class apart from the rest (transfer targets) in terms of quality.

United fans earlier in the season were terming him as the ‘New Nemanja Vidic’ while Zlatan Ibrahimovic also feels that his compatriot would impress at the big stage following a couple of standout seasons in Portugal.

Jose Mourinho was particularly critical over the fitness levels of both Chris Smalling and Phil Jones, and there is a sense that he is on the search for a new central defender who could adequately support Eric Bailly in the new league campaign.