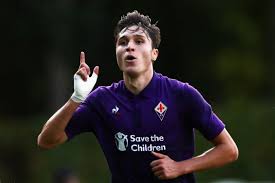 Tottenham Hotspur could reportedly make a club-record attempt to sign Federico Chiesa from Fiorentina at the end of the ongoing campaign. The Italy international is regarded as one of the best young talents in the Serie A and he is currently enjoying a decent season with La Viola with five goals and three assists in the league.

According to The Sun, Spurs chief executive Daniel Levy could be prepared to open the cheque book to pursue the highly-rated attacker in the summer as he aims to keep manager Mauricio Pochettino content with his role at the club.

It is added that Spurs would be willing to match the player’s £70m release clause and this should give the edge over the other Premier League suitor in Chelsea, who are currently restricted from making any business for the next two transfer windows.

As per The Sun, Chiesa is understood to favour a move to the English capital during the summer with Chelsea being his preferred choice of destination. However, the west London side have been barred from making transfers for the next two windows by FIFA and that won’t be overruled unless they win their appeal.

In such a case, Spurs should prove the most attractive option for the winger during the summer, considering their north London rivals Arsenal may not be willing to compete amid a restricted pre-sales transfer budget of around £45m.

Still, an agreement for the Italian may not prove sufficient to end the club’s decade-long trophy drought unless the hierarchy are able to keep hold of their main players, who are approaching the final year of their contracts in the summer.

Christian Eriksen and Toby Alderweireld are presently the main figures at the club, who are contracted only until the summer of 2020, and the board need to convince the duo to stay put by showcasing their transfer ambition which has been missing over the past 13 months.