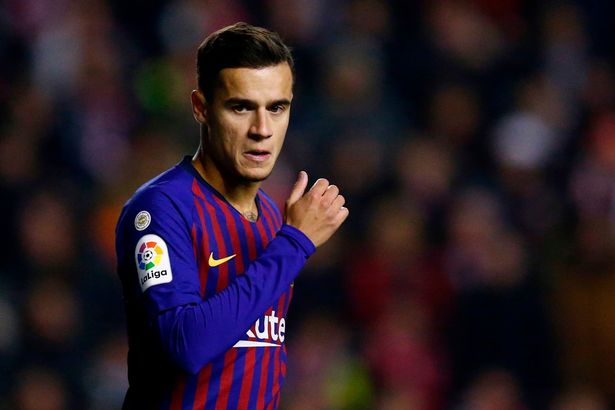 Barcelona superstar Philippe Coutinho is reportedly keen on making a comeback to the Premier League with Manchester United when the transfer window reopens at the end of the season.

The Brazil international only joined the Blaugrana from Liverpool for a whooping £142m 13 months ago, but he seems unsettled with the inability to claim a regular starting role under manager Ernesto Valverde.

According to an exclusive from The Star, the former Internacional graduate is keen on sealing a return to the English top-flight in the summer with the Red Devils regarded as his preferred destination.

Coutinho had initially envisaged the opportunity to become a key performer for the Catalan giants after making the switch, but that has certainly not been the case with Valverde not going by the reputation.

Unlike in the Premier League, the Brazilian has struggled to make a similar impact in his first full season in the Spanish top-flight and he has been restricted to just 15 starts while managing four goals and two assists.

At present, the attacker finds himself behind Ousmane Dembele in the pecking order for a forward role alongside Luis Suarez and Lionel Messi, but things could get tougher next term with Frenkie de Jong‘s arrival.

The Dutchman is unlikely to command a forward role at the Blaugrana, but he is nonetheless fancied to command a central midfield position where Coutinho has featured on multiple occasions during the ongoing campaign.

As such, it makes sense for the Brazilian to consider his future, should his season conclude on a difficult note and it remains to be seen whether United are willing to pay the £86m fee quoted by The Star.

United have already planned discussions over a permanent contract for interim boss Ole Gunnar Solskjaer and the Norwegian is likely to pen a fresh four-year deal unless there is a sudden change of thought.

In this case, the 46-year-old would likely demand a marquee signing to transform United into possible title-challengers next term, and Coutinho should fit the credentials, given his former showing at Liverpool.

Rivalry aside, the attacker experienced one of his most memorable spells with the Anfield club, and it perfectly makes sense to pursue his services, given he could be offered the freedom to express himself without the added pressure resulting from playing with big names including Messi and Suarez.

Paul Pogba has been United’s sole creative force when it comes from the centre of the park and Coutinho would certainly provide the Red Devils with another dimension to their game for the title-tilt next term.