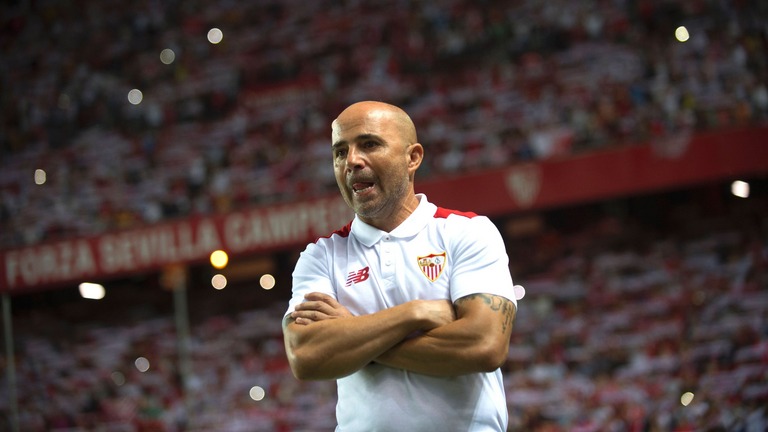 Sevilla manager Jorge Sampaoli has distanced himself from the Barcelona managerial job, rubbishing reports that the Catalan giants have contacted him to replace Luis Enrique at the end of this season.

The Argentine has reinstated his desire to stay at Sevilla and honor his contract. “I do not have to renew because I have a contract. Nor is it real that Barcelona have taken an interest in me, they did not contact me,” Sampaoli was quoted as saying by Skysports.

Initially, it was believed that Sampaoli’s stay at Sevilla is likely to be linked with the future of their sporting director Monchi. However, the 57-year-old has said that although he would want Monchi to stay, his departure won’t affect his decision to stay at Sevilla.

“I would like Monchi to stay, but it is not a condition for me to stay,” Sampaoli told Skysports.

He added, “According to the football project that has Sevilla, one is here to help or not, I feel useful, loved and respected.”

Earlier this month, Barcelona manager Luis Enrique, who has faced a lot of criticism for his team’s inconsistent performance this season, had announced that he would leave the Spanish club after his contract expires this summer. Since then, the rumour mills have linked a host of names with the Barcelona’s managerial role next season, and Sampaoli is believed to be one of the favorites.

After arriving in Europe with Sevilla last summer, Sampaoli made an immediate impact, this time in a league which is usually dominated by three clubs. Sevilla are currently third in the league table, just three points behind Barcelona, and they were the team to end Real Madrid’s 40-match unbeaten run earlier this year.

Previously, Sampaoli has shown his managerial potential with the Chilean national team. When Jorge Sampaoli was appointed as the coach of Chile in December 2012, he inherited a squad that had lost each of their previous three World Cup qualifiers. However, he turned around the team’s fortunes with some drastic tactical changes. Heavily influenced by Marcelo Bielsa, Sampaoli changed the slow-paced passing game of Chile with high-energy pressing football. He used various formations from three at the back to four at the back, and the Chilean team went on to win the Copa America on their home soil playing stunning football along the way.

Sampaoli has also been linked with English Premier League side Arsenal with Arsene Wenger’s tenure at the club seemingly heading towards an end. However, if Barcelona does come calling in the summer with an offer to become their second Argentine manager in the last four years, Jorge Sampaoli will find it difficult to turn them down.