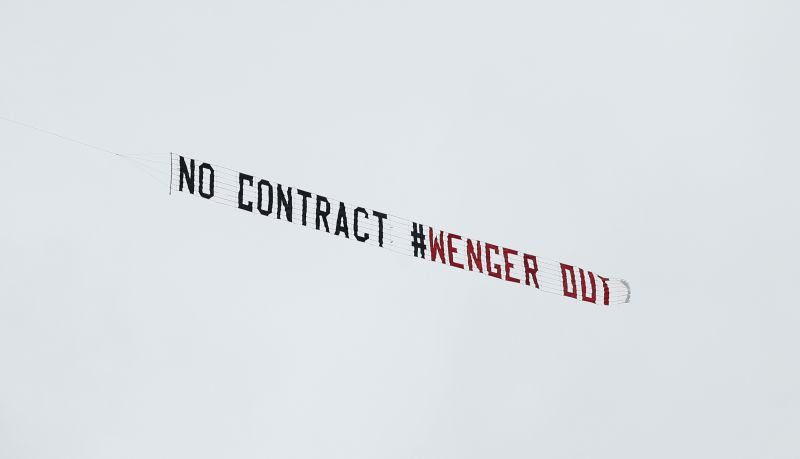 The Arsene Wenger debate was taken to the skies by the Arsenal fans during their club’s away trip to The Hawthorns. A plane flew over the stadium just before the early kickoff carry a “No Contract #WengerOut” banner while 15 minutes into the game, another plane carrying the banner “In Arsene We Trust #RespectAW” flew over the ground according to a report by Skysports.

The future of Arsene Wenger at the club has come under a lot of speculations with the club going through a rough patch of form currently. The Gunners have lost six of their last nine games in all competitions, which includes a 10-2 thrashing at the hands of Bayern Munich in the round-of-16 of the Champions League. With Arsenal having already dropped out of the title race in the league, the FA Cup currently seems to be their only hope of salvaging what has been a tough season so far.

Arsene Wenger’s current contract with the club expires at the end of this season, and the Frenchman is yet to sign a contract extension and has insisted that the decision will be made only at the end of the season. However, most of the fans feel it is high time for the club to make a change and appoint a new face at the helm, and they went to the extreme to get their point across to the board.

Just before the kick-off of the match between West Bromwich Albion and Arsenal at The Hawthorns on Saturday, a plane flew over the stadium with a banner stating, “No Contract #WengerOut”. However, it seems like Wenger still has a few supporters in the stands and 15 minutes into the game, another plane carrying an “In Arsene We Trust #RespectAW” banner was flown over the ground.

The situation was only worsened by Arsenal’s shambolic 3-1 loss against West Brom after a dismal performance by the team. When Arsene Wenger was asked about the banners after the match, he said, “I watch the game, I do not watch the stands during the game. I believe that you have to live with that. You focus on your job, no matter what people think,” reported Arsenal’s official website.

Wenger was further asked whether he feels that the supporters will unite if he makes a decision on his future. The Frenchman replied, “I don’t know. Don’t worry, I know what I will do in my future. You will soon know. Very soon.”

When asked about whether he has already decided about his future, Wenger has said that at the moment the club’s current bad run of form is more important than his future at the Emirates. Arsenal’s official website quoted him as saying, “You will see. I don’t think today I necessarily worry about that. We are in a unique bad patch that we’ve never had in 20 years. We lose game after game at the moment, and that is for me much more important than my future.”

Champions League Qualification Would Be A Success For Liverpool, Says Klopp