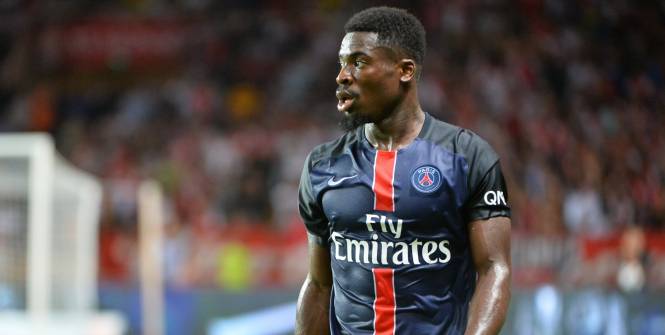 Opinion: Two Players who could leave Paris Saint-Germain this summer

Paris Saint-Germain failed to extend their dominance in the French Ligue 1 last term after they were outsmarted by a young Monaco side, whose attacking brand of football reaped rewards. Unai Emery had watched his predecessor Laurent Blanc clinch successive league triumphs, but he struggled to replicate a similar showing with his squad, which lacked the intensity during certain games through the season. Emery has already noted down his transfer targets for the summer, but the club are expected to offload their fringe players first in order to recoup funds for a potential spending spree. Calcio Insider looks into two players, who are most likely to end their association with the Capital outfit during the summer.

Serge Aurier: The Ivory Coast international asked to be omitted out of Paris Saint-Germain’s pre-season plans, and he looks set to pursue a fresh challenge elsewhere. Aurier had earned equal opportunities alongside Thomas Meunier last season, but the arrival of Dani Alves on a free transfer has changed things. Aurier is unlikely to play as the third-choice right-back at Parc des Princes, and he is prepared to move on despite Emery’s desire to keep him, L’Equipe h/t Metro.

Grzegorz Krychowiak: The Poland international arrived in the French capital last season with the reputation of being one of the finest midfield talents across Europe. However, his career has nosedived over the past year with Unai Emery having handed him just seven league starts all season. A player of his calibre would want to play in each game, and a move elsewhere looks the favourable choice for both parties. Krychowiak has not quite adapted to Les Parisiens’ style of play, and Emery has reportedly placed him in the market for the summer transfer window.

Apart from the pair, Hatem Ben Arfa is another who could be shown the exit door this summer after he was alleged to have put on extra-weight for which he was asked to trim down by Emery last term. Ben Arfa failed to find the scoresheet in 23 league attempts for Paris Saint-Germain, a huge difference to the 2015/16 campaign where he notched 17 goals for Nice.