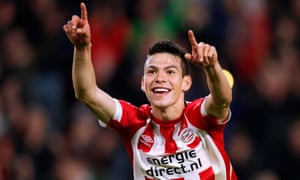 Pachuca club president Jesus Martinez has revealed that Manchester United have been keeping a close watch on the proceedings of PSV Eindhoven star Hirving Lozano since the tender age of 16.

The Mexico international built up his reputation with Pachuca after graduating through the club’s ranks but he is currently plying his trade for PSV whom he joined in the summer of 2017.

Speaking to ESPN Deportes, Martinez has acknowledged that United have held a long-term interest in Lozano and they are aware of the player’s progress from his time in the Pachuca academy.

He added that he savours the dream of watching Lozano make the switch to the Mancunian giants, given the player himself has the ambition of playing for the 20-time English champions.

Manchester United have possessed a weakness on the right side of the attack, where they have struggled to find the perfect player, who can provide the much-required creativity.

Marcus Rashford, Anthony Martial and Jesse Lingard have been the regular choices in the position this term but neither of them have particularly impressed when they have stayed put in the role.

As such, there are likely to pursue a new right-sided attacker during the summer and Lozano perfectly fits the bill, given he has amassed an impressive tally of eight goals and six assists from the position this term.

Still, there may be concerns regarding his ability to step up to the demands of the Premier League, but Lozano has shown in the past that he can raise to the big occasion after grabbing the sole goal in the shock World Cup group stage triumph over Germany last summer.

Manchester United are currently just two points adrift of the top four positions in the Premier League. They are scheduled to host Watford in their first game following the international break on Saturday.