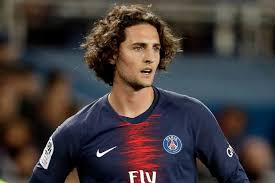 Manchester United are understood to have joined the race to sign Adrien Rabiot on a Bosman agreement from Paris Saint-Germain at the end of the season, The Sun reports.

The France international has just three months remaining on his existing deal with Les Parisiens and he is expected to be available on a free transfer after declining to extend his contract.

According to The Sun, United have joined the likes of Liverpool and Arsenal in the race to sign Rabiot, who has been earmarked as a youthful addition to the United midfield which includes the ageing Nemanja Matic and Ander Herrera.

It is added that the club are willing to match his demands for a £200,000-a-week on a top of a significant £10m signing-on bonus to lure him to Old Trafford during the summer transfer window.

Rabiot is currently training with the reserves at Paris Saint-Germain after falling out with the club’s hierarchy shortly after turning down the contract offer on the negotiation table.

Moreover, his attitude has come under scrutiny after he was partying shortly after the club’s Champions League exit this month, but this does not appear to have swayed his suitors.

At present, United possess the likes of Fred, Andreas Pereira and Scott McTominay, who are able to provide back-up to Matic and Herrera whenever called upon.

However, it appears that the United board are still looking at another recruit to increase the competition and Rabiot could be a no-brainer, considering the free transfer on offer.

Still, they may not get a clear route towards pursuing the midfielder, considering there are several other suitors including Tottenham, Arsenal and Liverpool, who could assure him of regular gametime.