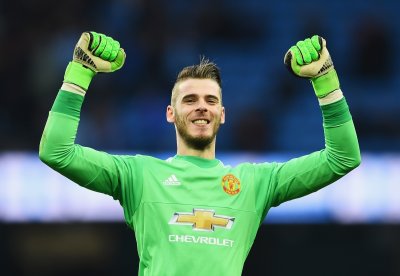 Manchester United are reportedly continuing contract discussions with goalkeeper David de Gea with his existing deal due to expire in 16 months’ time. The Spain international has been the club’s leading performer post the Sir Alex Ferguson era, winning the club’s Player of the Year accolade in four of the previous five seasons.

According to Sky Sports News, the United hierarchy have held positive talks with the world-class shot-stopper and they are prepared to meet his requirement for a £350,000-a-week contract. However, there still remains a few formalities to be sorted with the Spaniard’s representative playing hardball with his own demands which may drive the price up for the overall contractual agreement.

De Gea’s previous contract was due to expire at the end of the current season but the Red Devils made sure to avoid losing him on a Bosman by triggering the 12-month extension clause available. Nonetheless, it appeared that the shot-stopper was discontent during the first half of the season until the club made the decision to dismiss manager Jose Mourinho from the helm.

Under the Portuguese, the 28-year-old struggled to keep clean sheets with a vulnerable backline in front of him but things have changed under interim boss Ole Gunnar Solskjaer. The Norwegian has brought the belief into the squad and this has contributed to the improved defensive record, which has enhanced De Gea’s chances of keeping regular shutouts.

De Gea has been ever-present for the Premier League and Champions League duties during the ongoing season and he is expected to feature between the sticks when Manchester United entertain fierce rivals Liverpool in the top-flight this weekend. United are presently just one point ahead of Arsenal for the fourth place and anything less than a victory may see the Gunners leapfrog them to the final Champions League spot.