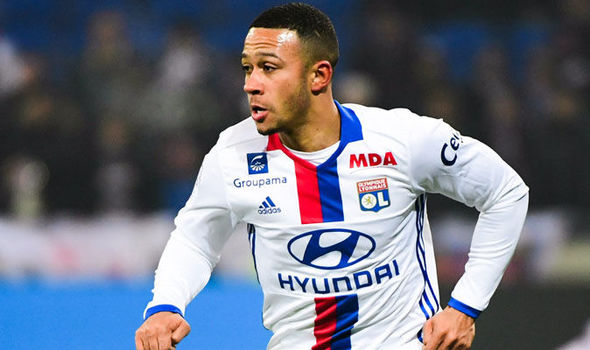 Lyon forward Memphis Depay has reacted to the prospect of making a return to Manchester United. The Netherlands international left Old Trafford for Lyon during the winter transfer window after he failed to earn a single league start under Jose Mourinho. The 23-year-old was restricted to just 20 minutes of top-flight last term, and he eventually decided to join Les Gones, where he has regained his old form.

Memphis bagged five goals and assisted a further seven in 17 appearances for Les Gones in the second half of last season, but he did have a couple of forgettable games which gave a glimpse of his time in Manchester. The Dutchman was dubbed as the ‘next Cristiano Ronaldo’ prior to his move from PSV but unfortunately, his career never took off as he struggled during his 18-month spell in the Premier League.

United apparently have a buy-back clause on the player’s contract, and when questioned over a potential return, Memphis was quick to put away the idea, he said, via Tuttomercatoweb: “No, to be honest. It’s not in my thoughts.I’m very focused on Lyon, and I’m very happy about my choice, and I don’t think of anything else other than to do the best for this team.”

After his dreadful spell at Old Trafford, Memphis would hardly consider a return, and the same goes for Mourinho, who is comfortable with his current crop of players. The Special One prefers to have personnel capable of maintaining a constant work rate, and Memphis just could not deliver on the manager’s instructions.

Memphis has regained his spot with the Holland national side by virtue of his performances in Ligue 1, and he will be expected to play a key role later this year with his nation at the risk of missing out on a World Cup appearance. Dick Advocaat’s side are currently placed third in their qualifying group with 10 points, and they will have to beat one of France or Sweden in order to avoid a major upset.