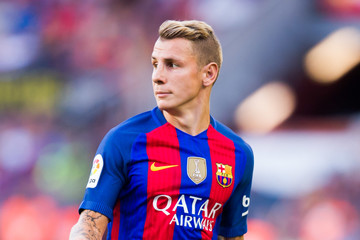 Inter Milan have added Lucas Digne to their transfer shortlist as they look to add a new left-back to their ranks this summer. The France international is currently with Spanish club Barcelona for whom he joined from Paris Saint-Germain last year.

Corriere dello Sport (via Fichajes) suggests that the Nerazzurri have made up a three-man shortlist for the left-back spot which includes Nice’s Dalbert Henrique and Valencia’s Jose Luis Gaya.

The Serie outfit have failed to live up to their expectations in recent seasons, and they are looking to use their summer investment in order to bridge the gap on the Italian heavyweights.

As per the report, Dalbert is the priority signing for the San Siro giants, but they could turn their attention to Digne, should the Brazilian opt against a move to the Serie A.

Digne did not make a huge impression following his €16m switch to Barcelona last summer, and he was restricted to just 14 league starts through the 2016/17 campaign.

As a result, Inter are weighing up a possible deal for the Frenchman, who could be reunited with former Roma boss Walter Sabatini – now the club’s new sporting director.

Digne managed 44 appearances during his sole season on loan with Roma between 2015 and 2016, and his relative experience could gain him the advantage over Valencia’s Jose Gaya.

Gaya has been regarded as one of the finest young full-backs in La Liga, but the lack of a big-club move appears to have hindered his chances of making a good reputation.

Arsenal and Manchester United are some of the elite clubs having previously expressed an interest, but Los Che have remained reluctant to place a price tag on his services.

Gaya has amassed over 80 league outings since his debut in 2012, and he has taken up the left-back position which was once occupied by Barcelona star Jordi Alba.

Opinion: Germany prove their mettle in the Confed Cup