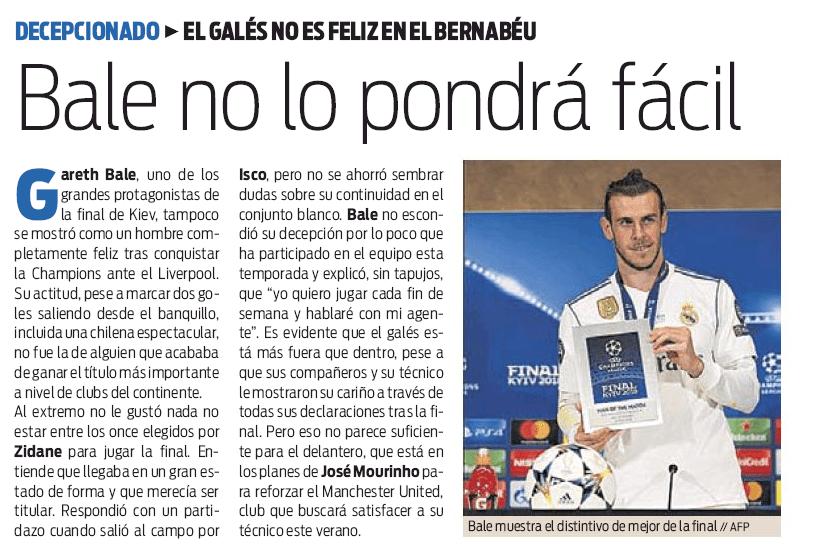 Manchester United finished second in the Barclays Premier League and Mourinho needs to strengthen his team if the club are to win the title next season.

The Red Devils are linked with neumorous quality stars and once again Gareth Bale is in the lime light. The Welsh international confirmed after the CL final that he is not happy with his current situation and would like to start regularly.

For that to happen, we can expect the former Spurs star to leave and as per today’s report from Spanish source Sport (Featured image), the playmaker is likely to leave the Bernabeu this summer and he is in the plans of Man United boss Jose Mourinho.

The question is, how will United line up if the £350,000-a-week star (The Guardian) does end up moving to the Old Trafford club?

The 28-year-old attacker mainly played on the left during his time at White Hart Lane, however, in the presence of Ronaldo at Real Madrid, Bale mostly played on the right flank.

In the recently concluded campaign, he scored 21 goals and provided 7 assists in all competitions for the Los Blancos.

At United, winter signing Alexis Sanchez is the first choice left winger and Bale could partner the Chilean international in the attack by starting on the right flank.

Here is how Man Utd could line up with Bale.

Liverpool to move in to sign €60million star - Negotiations to start