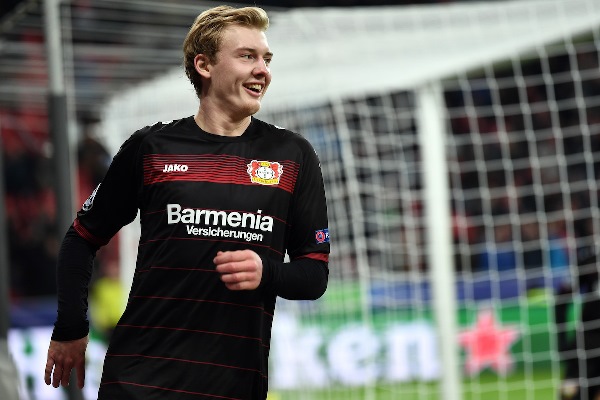 How Liverpool could line up with €60million German

Liverpool stars Salah, Mane and Firmino scored 91 goals between them in all competitions in the last campaign but the Reds do not have any quality player to cover for the trio.

Salah got injured in the Champions League final and Jurgen Klopp had no one to adequately replace him on the field.

In such a sceario, the Reds must sign a top attacker and they want €60million rated German international Julian Brandt.

The 22-year-old playmaker has  played over 150 games for Bayer Leverkusen. He has the ability to dribble with both feet can effectively play on either wing. Therefore, he can replace the likes of Mane and Salah if needed.

Furthermore, Brandt can also play in the central attacking midfield and he could be the player to finally replace Philippe Coutinho at Anfield.

In case everyone is fit, we can expect Klopp to utilize Brandt as the most advanced midfielder in the preferred 4-3-3 formation. The former Borussia Dortmund boss could also utilize a 4-2-3-1 system.

The Kaiser directly contributed in 19 goals in 39 games for the Bundesliga club last season. Here is how Liverpool could line up with Julian Brandt.