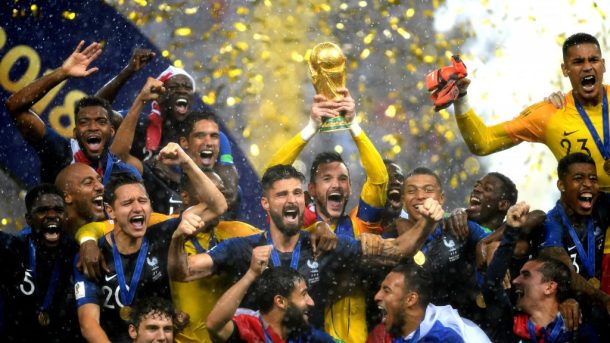 France were one of the strongest teams that entered the competition and yesterday, they won the World Cup for the second time after beating Croatia 4-2.

Croatia started the game brightly but the Les Bleus took the lead in the 18th minute of the game. Griezmann seemed to have dived to earn France the set-piece and Pogba was perhaps active and offside when it was taken, nevertheless, Mario Mandzukic, after his heroics in the semi final vs the Three Lions, became the first player in the history of the World Cup final to score an own goal.

Ten minutes after conceding against France, the underdogs equalized. Inter Milan star Ivan Perisic struck a brilliant half volley that hit Varane’s hip a bit and ended up in the back of the net.

Minutes after conceding, France got really lucky and with the help of VAR, they were awarded a penalty kick. Antoine Griezmann stepped up and restored his team’s lead by scoring his fourth goal of the competition. The French team led 2-1 at half time knowing that they have never lost a game in which the Atletico Madrid playmaker has scored.

Dalic’s men bounced back from a goal down to knock Denmark, Russia and England out of the tournament but this time, things got from bad to worse. In search of an equalizer, Croatia pressed a lot of men forward and Kylian Mbappe was a major threat on the counter.

In the 61st minute of the game, the 19-year-old starlet did good work on the right wing and passed the ball to Griezmann in the box, who laid it up for Paul Pogba. The Manchester United star’s first shot was blocked but he scored from the rebound.

Four minutes later, France netted their fourth goal of the game. Kylian Mbappe struck a low shot from outside the box and became the first teenager to score in a WC final since Brazilian legend Pele (1958).

In the 69th minute, Croatia got one goal back thanks to a gift handed over to them by Hugo Lloris. The Tottenham goalie tried to be clever and get around Mandzukic with his feet but the ball hit the right foot of the center forward and went in.

After that, Dalic made two changes and brought Kramaric and Pjaca on the field hoping to turn things around but France were not troubled and Didier Deschamps became the third man to win the World Cup title both as a player and as a manager.

BBesiktasCroatiaEnglish Premier LeagueLiverpoolTransfers
Read More
Liverpool seem to be seriously interested in signing Domagoj Vida from Turkish side Besiktas in the summer transfer…
EEnglandWorld Cup
Read More
Tottenham superstar Harry Kane will be leading the England team in Russia and he is a definite starter…
CCroatiaEintracht FrankfurtEnglish Premier LeagueGerman BundesligaManchester UnitedTransfers
Read More
Manchester United have already completed three signings this summer by hiring the services of Dalot (fullback), Fred (midfielder)…
RReal MadridWorld Cup
Read More
Real Madrid superstar Cristiano Ronaldo had another amazing club campaign and he will now look to shine for…
RRussiaSaudi ArabiaWorld Cup
Read More
Saudi Arabia will collide against Russia to kick start the World Cup 2018 tonight. The hosts should be…
EEnglish Premier LeagueLiverpoolStoke CityTransfersWorld Cup
Read More
Liverpool have got brilliant attacking players in the squad but they surely lack quality and depth in their…