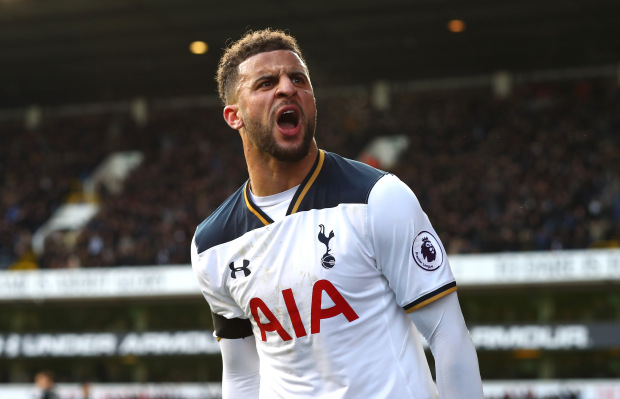 Premier League champions Chelsea will reportedly do battle with Manchester City in the race to sign Tottenham Hotspur defender Kyle Walker in the summer.

The England international has been at odds with manager Mauricio Pochettino in recent weeks with the Argentine opting to play Kieran Trippier in the right wing-back role.

As a result, speculation over Walker’s future has heightened with Manchester City deemed favourites to pursue the Three Lions defender in the next transfer window.

According to The Mirror, the Citizens could face potential competition from Antonio Conte’s Chelsea, who will seek to strengthen their squad ahead of a Champions League stint next season.

Nigeria international Victor Moses has adjusted brilliantly to the right wing-back position in west London, but Conte is nevertheless on the search for new options in order to maintain a Premier League challenge next term.

Walker only inked a fresh five-year deal with Spurs earlier in the season, but the Blues would be willing to double his current £70,000-a-week package in order to lure him to Stamford Bridge.

Irrespective of this, they will have to negotiate a hefty transfer package with their north London rivals, who will probably hold out for a £40m sum for their prized asset.

Chelsea clinched their fifth Premier League crown – and the first under Antonio Conte last Friday, and they will receive the trophy when they take on relegated Sunderland in the final game of the season on Sunday.

Meanwhile, the west London giants will also have the chance of clinching a domestic double when they face off against Arsenal in the FA Cup final on May 27.

The Blues suffered different fates during their Premier League outings against Arsene Wenger’s side, and the London derby promises to be a thriller with their league rivals having recently switched to the three-at-the-back formation with success.

EEnglish Premier League
Read More
Lyon forward Memphis Depay has reacted to the prospect of making a return to Manchester United. The Netherlands…
TTransfers
Read More
Liverpool have been brilliant in the Champions League this season and they will collide against Real Madrid in…
EEnglish Premier League
Read More
Arsenal continued their winning streak at the Emirates Stadium as they brushed aside West Bromwich Albion by a…
TTransfers
Read More
Manchester United could potentially vie with Arsenal for the services of Thomas Lemar in the New Year. The…
CChelsea
Read More
Arsenal play host to Chelsea in the second leg of the League Cup semi-final. The Gunners played out…
TTransfers
Read More
Arsenal have been linked with Uruguayan international and Sampdoria midfielder Lucas Torreira for quite some time and the…