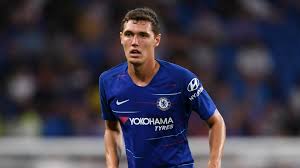 Chelsea are understood to hold no desire of parting ways with defender Andreas Christensen when the transfer window reopens in less than two months’ time. The Denmark international has experienced a difficult spell under new manager Maurizio Sarri this term and he has yet to make a single appearance for the Blues in the English top-flight.

Owing to this, there have been suggestions that he could pursue a fresh challenge when the transfer window reopens but according to Goal.com, the Blues are said to possess no interest whatsoever in selling the defender mid-season.

Christensen made his first-team bow with the Blues during the previous season under Antonio Conte and he made a total of 40 appearances across all competitions despite suffering from fatigue during the final months of the campaign.

However, the current season has paved much differently that he would have hoped with new boss Maurizio Sarri resorting to the orthodox defensive setup from a three-man backline, which has dropped him down the pecking order.

Christensen has exclusively started matches in the League Cup and Europa League this term with Antonio Rudiger and David Luiz having become the first-choice central defensive picks since the start of the current campaign.

Despite this, the Dane appears very much certain to stay put with the Blues, who are certain to require the additional depth in the central defence as the season approaches the hectic phase of the campaign where they could feature across all four competitions.

Meanwhile, club-captain Gary Cahill is in the same kind of situation amid the reduced gametime but Goal.com claims that the Blues may not necessarily block his departure, should he push through a move at the turn of the year.

The former England international presently has just eight months left on his existing Blues deal and as things stand, he may not fancy another contract renewal amid the vastly reduced gametime compared to his previous eight campaigns with the club.