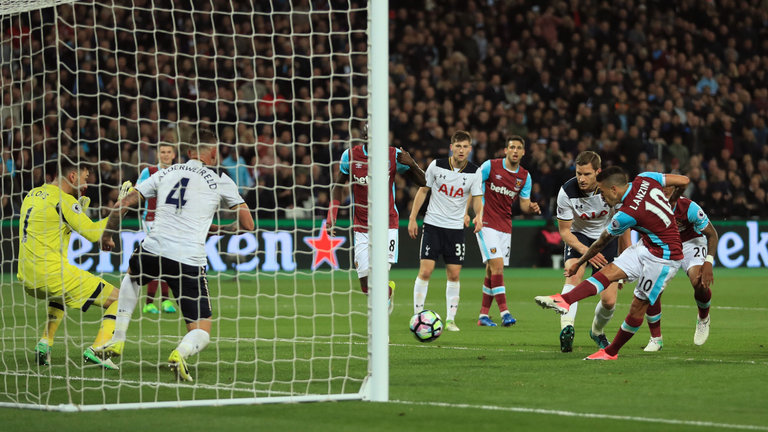 Premier League champions Chelsea could lodge a formal approach for West Ham United’s Manuel Lanzini, should Cesc Fabregas end his association with the club this summer.

Fabregas, 30, has endured one of his toughest seasons in professional football after having struggled to cement a starting spot for two-thirds of the Premier League campaign.

According to The Sun, the Blues could be preparing to replace Fabregas in the summer with the Spaniard constantly linked with a move to Serie A giants AC Milan.

As a result, the club appear to have turned their attention towards Lanzini, who has impressed in the playmaker role for West Ham United following Dimitri Payet’s unceremonious exit in January.

Lanzini bagged eight goals and two assists in the recently concluded Premier League season, and his stock seems to have risen with the likes of Arsenal, Liverpool and Everton being credited with an interest in his signature.

In spite of this, the Hammers are likely to play hardball in negotiations over their key asset, and only a fee in excess of £25m will urge them to cash in on their player in the summer.

Blues technical director Michael Emenalo is understood to be a huge admirer of the Argentine’s talents, and he believes that the 24-year-old has the potential to reach the heights of Real Madrid’s Luka Modric.

Lanzini’s showing this season have not gone unnoticed after he earned his maiden call-up to the Argentine national side, who are still managerless after the sacking of Edgardo Bauza.

The Blues are likely to require additional recruits in their attack front owing to their Champions League participation next term, and Antonio Conte will be keen to bolster his ranks this summer in order to offer a strong challenge in Europe’s premier competition.

For now,  the Italian coach will be concerned about his club’s FA Cup final against London rivals Arsenal as he bids to clinch a domestic double in his first season in English management.