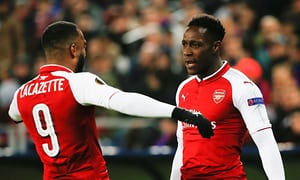 Arsenal are understood to have decided against offering Danny Welbeck with a new contract beyond the summer of 2019. The England international’s career with the Gunners has been marred with a number of long-term injuries and it appears that his latest setback could seemingly end his association with the north London side.

According to Sky Sports News, Unai Emery’s side have no plans to renew the forward’s contract and the Englishman would be free to leave the club on a Bosman when the current season comes to a conclusion.

Welbeck has generally been a bit-part player during his time with the Gunners but last season, saw a rare exception where he managed over 40 appearances for the club under the guidance of ex-boss Arsene Wenger.

With the arrival of Emery, Welbeck’s gametime was once more restricted to the Cup competitions but he happened to impress with five goals in all competitions before his long-term ankle injury against Sporting.

The damage is likely to rule him out for the remainder of the campaign and this should pretty much phase him out of the club with the hierarchy not going by the emotional coercion to hand him a renewal.

Meanwhile, a report from Mercato365 suggests that the Gunners may have already earmarked a replacement with Lille’s Nicolas Pepe on their radar when the current campaign comes to a close.

The Ivory Coast international has netted 10 goals and contributed five assists in just 16 league appearances this term and it remains to be seen whether he would fancy competing for places, should he make the switch to the Emirates.

Pierre-Emerick Aubameyang and Alexandre Lacazette are currently the first-choice picks when it comes to the Premier League duties upfront but Pepe may still get into the lineup with his versatility to feature in the wider positions.