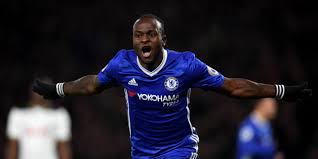 Former Nigeria international Victor Moses is reportedly considering his future with Chelsea after finding himself out of favour in terms of a regular Premier League role under manager Maurizio Sarri.

The 27-year-old enjoyed a purple patch in the past two seasons under ex-boss Antonio Conte, where he was regularly slotted into the right wing-back role in the Italian’s preferred 3-4-3 formation.

However, with the manager’s departure, the Blues have reverted to the traditional 4-3-3 setup under Sarri and this has cost Moses his starting spot with Cesar Azpilicueta taking up the right-back position.

Moreover, Sarri is said to consider Moses as more of a winger than a right-sided defender and that has further increased the competition for him with Eden Hazard, Pedro and Willian ahead of him in the pecking order.

According to Goal.com, the Nigerian is said to be frustrated with the reduced gametime since the current campaign started and he is understood to be mulling over a winter exit from the west London giants.

Moses managed to salvage his Blues career after becoming a constant presence in the right wing-back position which suited his style of play and this earned him a fresh four-year contract in March 2017.

However, fast forwarding 18 months, Moses has once more returned to the periphery of the Blues first-team under Sarri and he appears unlikely to earn regular gametime unless an injury crisis props up.

Since the campaign started, Moses has managed just four appearances for the west London side and out of those, two have come in the Premier League where he has featured from the substitutes’ bench.

His sole start during the ongoing campaign came during the League Cup third round tie versus Liverpool where the Blues came from behind to seal a memorable 2-1 triumph at Anfield after a spectacular Hazard strike.