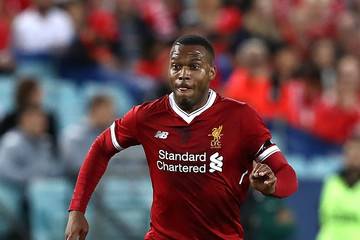 England international Daniel Sturridge is reportedly considering a fresh challenge away from Liverpool as he looks to better his chances of making Gareth Southgate’s squad for next summer’s World Cup finals.

According to The Mirror, the former Manchester City graduate has set his sights on a potential move to the Spanish La Liga where the likes of Real Betis and Valencia are alleged to be vying for his services.

Sturridge has not had an injury-free spell since the 2013/14 season where the Reds came so close to the title, and he is now said to be eyeing a move overseas in order to earn regular playing time.

England coach Gareth Southgate has already hinted that he is unlikely to pick players who are warming the substitutes’ bench, and a move to La Liga will help Sturridge’s cause, although the Reds could be reluctant to permit his permanent sale midway through the season.

Despite being restricted to just five starts, Sturridge’s ability has been talked up regularly by Klopp, who has stressed that the marksman is returning to a similar body condition, which made him a huge hit during the early phase of his Merseyside career.

As a result, a temporary deal looks the best option on hand for Sturridge, who is desperate to start games in the latter half of the season to make his second World Cup finals after his maiden bow in Brazil.

Sturridge was dropped from England’s latest squad with Southgate focusing on younger recruits, but the manager has stressed that age is unlikely to prove a stumbling block as he aims to pick the best set of players, who can make the difference in Russia next summer.