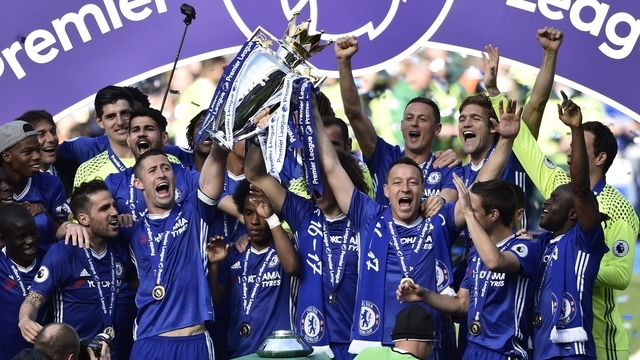 The 2016/17 Premier League season came to a close last weekend with Chelsea being crowned the Premier League champions. Calcio Insider takes a look at the best players in each position in what has been another enthralling campaign in England’s top flight.

The three-at-the-back formation brought plenty of success for the Blues as well as their rivals Tottenham Hotspur, who earned their best ever finish to the Premier League season. The majority of the top-flight clubs opted for a back three at some stage in the campaign.

Thibaut Courtois was undoubtedly the best keeper overall in the Premier League after he finished the season with 16 clean sheets – one ahead of Tottenham Hotspur’s Hugo Lloris.

Cesar Azpilicueta was ever-present for the Blues during their Premier League triumph, and his success was rewarded with a contract extension earlier in the season. His exclusion from the PFA Team of the Year was a big surprise for many. Accompanying him, would be his fellow teammates David Luiz and Gary Cahill, who performed above their expectations despite initial doubts over the combination.

Kyle Walker may not have had a good ending to the Premier League season, but his efforts earlier in the campaign has been good enough to earn him a place in our list.

Likewise, Spurs compatriot Danny Rose had a top campaign with Spurs prior to his injury, but we should not disregard the qualities displayed by Marcos Alonso, who defied his critics to become an English champion with Chelsea.

N’Golo Kante followed to improve on his performance from his previous season as he provided the impetus for the Blues to roam forward with ease. The PFA Player of the Year could have won the double by lifting the FA Cup, but it was not to be after the club collectively failed to show up against Arsenal on Saturday.

Dele Alli is normally a forward-minded player, but we feel he has the potential to adopt to the central attacking midfield role. The Englishman continues to develop into a world-class prospect, but he needs to keep his head down and maintain his performances for another season.

Liverpool’s Sadio Mane was outstanding throughout the Reds’ league campaign with his goals and assists proving key to the club’s top-four finish in the Premier League. Performances against Arsenal(away) and Tottenham Hotspur (home) were a particular highlight as he showcased Jurgen Klopp’s way of play.

Partnering him, should be Alexis Sanchez, although he failed to make the PFA Team of the Year. The Chilean single handedly kept the Gunners in the hunt for the Champions League, only to finish short in fifth place. In spite of this, he ended the season on a high note with a man of the match performance in the FA Cup final triumph.

Diego Costa managed to shed his previous season form to produce yet another stunning display for Chelsea. His bulliness was back on display with a stunning solo effort against West Bromwich Albion which earned the club a 1-0 victory.

Arsenal lift the FA Cup for a record 13th time

Diego Costa reveals the 'only club' he would leave Chelsea for

EEnglish Premier League
Read More
Liverpool have one foot in the final of the Champions League after beating Roma 5-2 in the first…
TTransfers
Read More
Liverpool have secured the much-anticipated transfer of Mohamed Salah after they negotiated a £34m sum with AS Roma for…
TTransfers
Read More
Tottenham were interested in signing Andre Gomes from Barcelona last year but the player eventually stayed with the…
LLiverpool
Read More
The World Cup will kick start in 10 days and we take a look at one of the…
MManchester United
Read More
France entertain Wales in Friday’s international friendly at the Stade de France. Both teams had contrasting fortunes during…
EEnglish Premier League
Read More
With the English transfer window having reached its conclusion, Calcio Insider peeks into the proceedings of a couple…