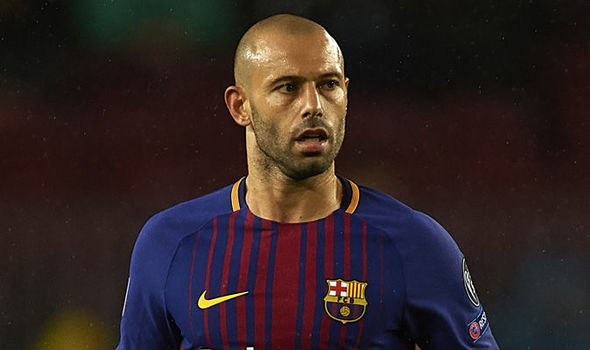 Barcelona defender Javier Mascherano is reportedly edging closer to a winter move to the Chinese Super League with Hebei China Fortune deemed to have agreed a proposed switch. However, the Blaugrana are unlikely to cash in on the centre-back without a suitable replacement considering Samuel Umtiti is still on the sidelines with a hamstring injury picked up earlier in the month. Gerard Pique and Thomas Vermaelen are the only other fit and established centre-backs in the club’s ranks.

Yerry Mina – Palmeiras: The Colombia international is said to have an agreement to join the Catalan giants next summer, but the move could be fast-tracked to facilitate Mascherano’s exit. However, the La Liga leaders are yet to make any sort of contact regarding a winter move, and Mina faces a tricky task on his hands to adapt to a new environment . Mina has been capped by Colombia nine times, contributing three goals.

Daley Blind – Manchester United: A surprise link of late. The Dutchman is reported to be a target for both Inter Milan and Barcelona, as per Calciomercato, but the latter could have the advantage after having previously made an approach for his services. Barcelona sporting director Roberto Fernandez had tried to pursue Blind while he was still at Ajax, and the defender’s versatility appears to have caught Ernesto Valverde’s eye. Blind, who has just over six months of his United deal, can feature at left-back, centre-back or holding midfield.

David Luiz – Chelsea: Likewise Blind, Luiz finds himself in the fringes of the Blues’ first-team despite winning the Premier League only seven months ago. The Brazilian has not featured in a single league outing under Antonio Conte since the 3-0 Champions League loss at AS Roma, and there appears a breakdown in the relationship between the pair. Luiz is currently sidelined with an inflammation in his knee (transfermarkt), and this could hamper a winter exit. A short-term loan move would ideally suit Barcelona.