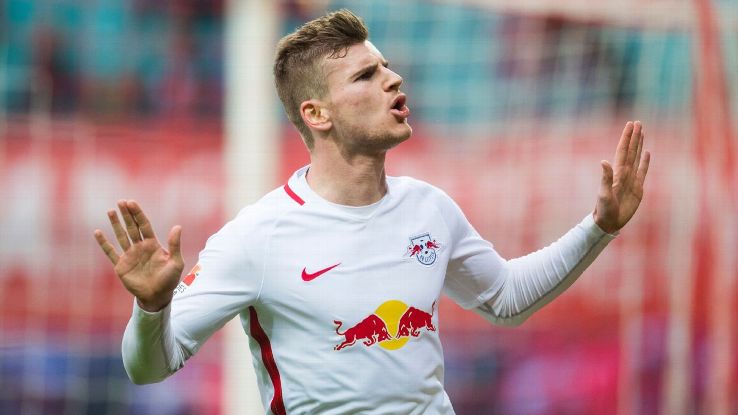 Real Madrid are reported to have watched Timo Werner closely during Germany’s 6-0 triumph over Norway in the World Cup qualifier in midweek. The RB Leipzig striker scored a brace on the night whilst putting the Germans on the cusp of next year’s World Cup finals in Russia.

According to radio station La Sexta h/t Fichajes, the European champions are keeping tabs on the progress of the 21-year-old, who is regarded as one of the finest young strikers in the world. Werner has had to take the hard yards in order to develop his skills after having managed just 14 goals in over three years with Stuttgart.

Werner joined Leipzig in their maiden promotion to the Bundesliga last campaign, and he became an instant hit as the whole team gelled together brilliantly. Leipzig eventually ended the Bundesliga season as runners-up to Bayern Munich with Werner providing 21 goals and seven assists in just 31 games.

The youngster has already been touted to lead the line for Germany at the World Cup finals next summer, and Los Blancos appear to be maintaining a keen interest in his signature. Manager Zinedine Zidane has repeatedly stressed that he is comfortable with the makeup of his current squad, but they are seemingly a striker short following the departure of Alvaro Morata.

Young graduate Borja Mayoral has been earmarked as the backup to Karim Benzema up front this season, but the club’s hierarchy are fully aware of the need for a new marksman with the former approaching the latter stages of his career.

Meanwhile, Los Blancos are also monitoring the progress of Schalke midfielder Leon Goretzka, who recently notched his fourth Germany goal against Norway. The 22-year-old’s contract is due to expire at the end of the current campaign, and the Spanish champions could possibly lure him with a sizeable signing-on fee.