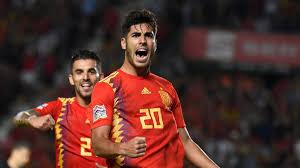 Spain will be aiming to progress beyond their Nations League group when they take on England in Seville on Monday night. La Roja have already beaten both England and Croatia in the previous month of fixtures and a stalemate versus the Three Lions in the upcoming game would assure them progress to the final stage of the competition.

Meanwhile, England are still searching for their maiden competitive win since the quarter-final of the World Cup. The Three Lions could only muster a goalless draw against Croatia last Friday in their second Nations League game but the finishing was disappointing with Marcus Rashford missing two straightforward opportunities to find the scoresheet.

The previous encounter between the sides was at the Wembley Stadium last month where La Roja sealed a 2-1 victory. Marcus Rashford bagged the opener for the Three Lions after just 11 minutes but they were soon pegged back with Saul Niguez and Rodrigo Moreno finding the scoresheet before the 30th-minute mark.

Following the break, the hosts had the better opportunities to find the net but some poor finishing from Marcus Rashford combined with a Danny Welbeck goal which was chalked off for a foul, meant that they had to settle for a maiden home defeat under Gareth Southgate.

Marco Asensio – Spain: The Real Madrid attacker was the star during La Roja’s previous Nations League game against Croatia which they won by a comfortable 6-0 scoreline. In that game, the Spaniard contributed a goal and three assists for Luis Enrique’s side and he was on the right end of every attack planned against the 2018 World Cup finalists. With both David Silva and Andres Iniesta retired from the game, he is once expected to be pivotal to the country’s result against the Three Lions, given another influential performer in Isco remains sidelined after his appendicitis surgery.

Harry Kane – England: Kane has gone through a rare phase in his short international where he has failed to find the scoresheet. The Tottenham marksman appeared in the form of his life after scoring six times from just four World Cup matches but his form has since witnessed a downslide with no goals in six straight matches. This run has already led to talks regarding his fitness but the striker has constantly reaffirmed that he has no such concerns. Kane had a wonderful chance to find the scoresheet versus Croatia last week but he could only find the woodwork from his header.