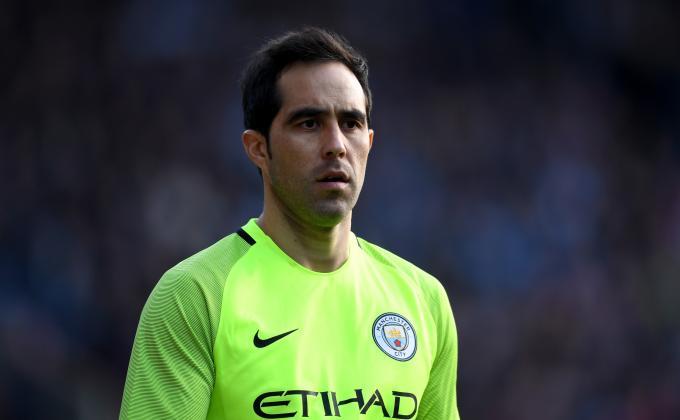 Serie A giants Napoli are weighing up a transfer approach for Claudio Bravo, who had an average debut campaign with Manchester City last season. The Chile international was a surprise exit from Barcelona last summer after he decided to link up with Pep Guardiola in a deal worth €18m.

Upon his arrival, Joe Hart was sent on a season-long loan at Torino, and things looked rosy for the 34-year-old, who had only Willy Caballero in his way. However, the former Real Sociedad man struggled to adapt to the English game, and he was often found wanting in the starting lineup before Guardiola opted to tweak things around.

Pep utilised both Caballero and Bravo equally over the course of the previous season but the latter has moved on to Chelsea following his release earlier last month. City have since signed Benfica’s Ederson to take up the role between the sticks, and it looks likely that Bravo could play deputy with Hart yearning for playing time elsewhere.

Sky Italia, however, has a different point of view with Bravo having emerged as a top target for Napoli ahead of the 2017/18 season. Pepe Reina has served for the Naples outfit with grace over the past few seasons, but his future is in doubt beyond June 2018 following an unexpected turn of events in May.

Reina had taken his wife alongside him at the end of the season bash where club president Aurelio di Laurentiis appeared to take a cheeky dig at his partner. This had not gone well with Reina, who later on wrote on Twitter: ‘The true elegance is to remain indifferent to people who are worth little’.

Bravo recently showed his flexibility in front of goal with three successive saves in the penalty shoot-out win over Portugal, and the Citizens would be wise to keep hold of the experienced shot-stopper, who could turn his struggles into notable performances if offered the chance.