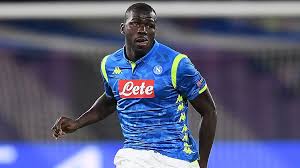 Manchester United are reportedly planning to smash their transfer record with Napoli’s Kalidou Koulibaly on their sights ahead of the forthcoming transfer window. The Red Devils have already failed with two bids for the former Genk ace and they appear keen on making a fresh approach with a view to prising him away from the Stadio San Paolo.

According to Evening Standard, manager Jose Mourinho is likely to be backed with a significant transfer kitty when the transfer window reopens with executive vice-chairman Ed Woodward highlighting that the club are prepared to break the current transfer record for a defender held by Virgil van Dijk’s £75m move to Liverpool from Southampton last winter.

Koulibaly has been on the Red Devils’ radar since the previous summer transfer window where he was one of the players recommended by former scout Javier Ribalta. However, the club were more keen on pursuing a transfer for one of Toby Alderweireld, Harry Maguire or Jerome Boateng, though a deal failed to materialise for any of them before the transfer deadline.

Owing to this, Mourinho appears intent on pursuing a new centre-back when the winter transfer window opens next month but the United board nevertheless seem to have alternatives to Koulibaly, who could cost a minimal fee of around £100m.

Long-term target Alderweireld has once more been identified as an option for the New Year whilst the club are also understood to be monitoring the proceedings of Milan Skriniar, who has built his reputation with Inter Milan over the past 18 months.

Alderweireld currently has 18 months left on his Spurs contract after they triggered a one-year extension clause but the club could still consider a mid-season sale, given the defender has a £25m release clause which would be available during the final two weeks of the 2019 summer transfer window.

Skriniar, meanwhile, has more than three-and-a-half years remaining on his contract with Inter but he may be tempted by the prospect of joining the Red Devils after the Nerazzurri were ousted from the Champions League despite being in a commanding position at one stage.