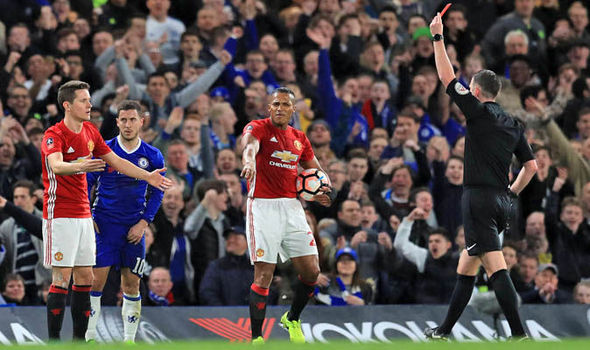 Manchester United Charged By FA For Failing To Control Players

Manchester United have been fined £20,000 by the English FA for failing to control their players during their FA Cup quarter-final clash against Chelsea at the Stamford Bridge on Monday.

The incident took place in the 35th minute of the game, which Chelsea won 1-0 with N’Golo Kante scoring the winner in the second half, when referee Michael Oliver showed midfielder Ander Herrera his second yellow card of the match. A host of United players surrounded the referee after he gave Herrera his marching orders.

The Spaniard received his first yellow card in the 20th minute of the game after a foul on Eden Hazard. Fifteen minutes later, Herrera brought down the Belgian international once again after Hazard beat him with a delightful turn. The 10-man United went on to lose the quarter-final clash 1-0 and now they face further sanction from the FA for failing to control their players during the red-card incident.

The Red Devils have been fined £20,000 by the FA, and they have until 6 pm on Friday 17 March 2017 to respond to the charge according to a statement released on the official website of the FA.

“Manchester United have been charged for failing to control their players.

“It follows an incident in the 35th minute of the Emirates FA Cup quarter-final tie against Chelsea at Stamford Bridge yesterday [Monday 13 March 2017].

“The club have until 6 pm on Friday 17 March 2017 to respond to the charge,” read the statement published on the FA’s website.

Mourinho, who has faced the ire of the FA for criticizing referees earlier this season, stopped short of voicing his anger at the decision in the post-match press conference, reported Skysports. Both Mourinho and Chelsea manager Antonio Conte were involved in altercations during the game at the sidelines over various decisions from the officials during the game and had to be separated the fourth official at the touchline.

Manchester United have run into a lot of trouble with the FA this season. Mourinho had served a one-game touchline ban during their 3-1 victory at Swansea City last year after admitting an FA charge of using “abusive and/or insulting words to an official” before being sent to the stands by referee Mark Clattenburg during the Old Trafford draw against Burnley in October. He was also banned by the FA after ‘endangering people around him’ by kicking a water bottle during United’s 1-1 draw against West Ham United in November.

Champions League Qualification Would Be A Success For Liverpool, Says Klopp