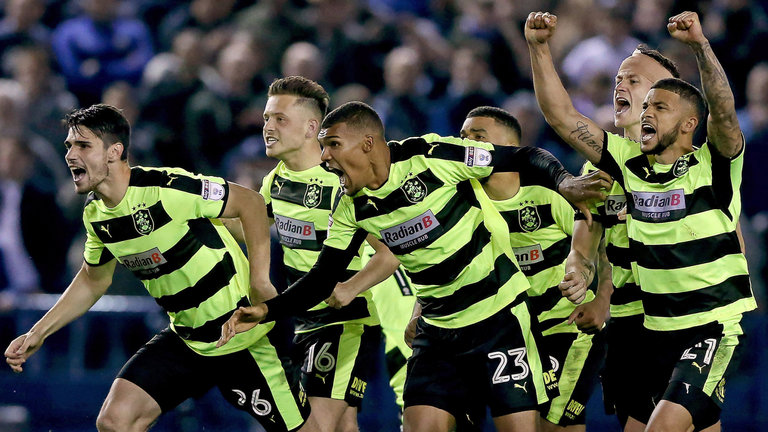 Huddersfield Town ended their 45-year wait for a top-flight return following a penalty shoot-out win over Reading in the Championship play-off final.

The Terriers ended a lowly 19th in the Championship table last term,  and few would have predicted that David Wagner would push the club towards promotion in his first full season in charge.

Huddersfield are among a few clubs in the second division, who work on a predictably low budget, and much of their emphasis is on grooming players and getting a bargain or two – predictably from the loan market.

In spite of this, the west Yorkshire side managed to stay within the top three places for most of the season, and at one stage, were in line to potentially compete for an automatic promotion spot.

However, they dropped off during the dying their stages of the campaign to finish in a reasonable fifth place where they had to tackle the likes of Sheffield Wednesday, Reading and Fulham in the play-offs.

The Terriers crept through the semi-final against Sheffield Wednesday after they clinched a penalty shoot-out win after the scores were level at 1-1 across both legs.

Fulham were predictably the favourites to clinch promotion owing to their excellent form in the final weeks of the Championship, but their threat was eventually nullified by a Reading side which bagged on the experience of Yann Kermorgant to secure the only goal in the other semi-final.

The final on Monday proved to be a stalemate between both Huddersfield and Reading, but on-loan Chelsea winger Izzy Brown could have won the game in the first-half, had he saved the embarrassment of missing out on goal from a yard out.

Huddersfield had a good practice from the six-yard box during their win over Sheffield Wednesday, but they managed to spoil their initial effort as they found themselves 3-2 down with just two attempts to go.

On-loan Liverpool shot-stopper Danny Ward saw Royals defender Liam Moore waste an effort over the crossbar and this pulled things level with Andre Mooy making no mistake with his opportunity.

At 3-3, it could have been any one’s game, and Ward came to the party to make a save off Jordan Obita which left club-record signing Christopher Schindler to score the £172m penalty.

The Terriers are likely to have their toughest campaign yet on their return to top-flight football, but Wagner will be hoping to keep his squad intact by securing permanent deals for some of their Premier League-based players – which include the likes of Brown, Ward, Mooy and Kasey Palmer.