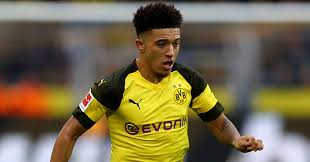 Borussia Dortmund chief executive Hans-Joachim Watzke has stressed that Jadon Sancho won’t be sold by the German club when the transfer window reopens at the end of the campaign.

The 19-year-old has been attracting interest from some of Europe’s most elite clubs over the past year, and he has recently been fancied to make a potential return to the Premier League with Manchester United.

However, speaking exclusively to Eurosport Germany, Watzke has clarified that the attacker won’t be available in the transfer market for the summer, and they are already preparing for next season alongside the teenager.

Sancho made the choice to leave Manchester City to join Dortmund in the summer of 2017 after it was known that he would not get a fair chance of securing regular gametime with the star-studded Mancunian outfit.

His first season with the club was not the best with just one goal and four assists coming from the Bundesliga, but he has managed to drastically improve his fortunes during the current campaign with more gametime under his belt.

Sancho has already bagged eight goals and 13 assists in the German top-flight this term, and his tally has certainly contributed to the club’s aim to end Bayern Munich’s six-year dominance to secure their maiden title since the 2011-12 season.

Considering this, Dortmund seem determined to keep hold of the right-sided winger, who has more than three years remaining on his existing deal with the club. Moreover, the club are set to part ways with Christian Pulisic, who has been an influential player for them in recent years, and they wouldn’t want to lose both at the same period of time.

Pulisic has endured a mixed season with the German giants this term and his regular concerns with form and fitness has proved a lucky charm for Sancho, who has been able to command a regular role ahead of the 20-year-old on the right flank.